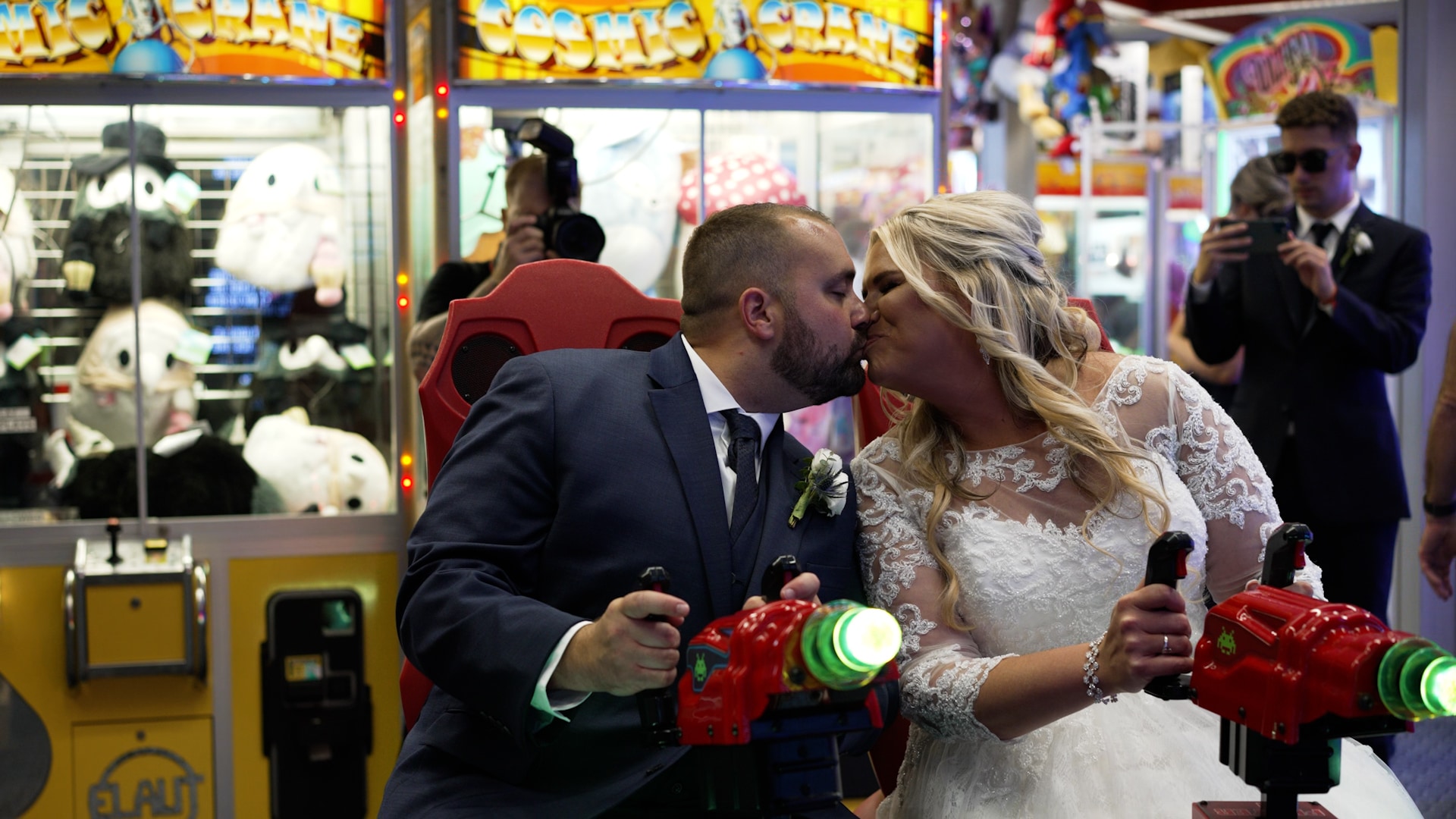 We filmed this wedding in the summer of 2021. Nikki and Bill was one of those weddings that was rescheduled 3 times. The day didn’t start with getting ready shots. That was important for Nikki and Bill. They wanted more shots of everybody already dressed in gowns and suits. We built the schedule that way on purpose to allow more time to film before the ceremony.

The day started on the boardwalk at the Jersey in Point Pleasant. We started filming in front of Jenkinson’s Aquarium in the early afternoon. There wasn’t a cloud in the sky, which isn’t always a good thing when you’re filming video or taking photos. Lucky the boardwalk had some shady spots we were able to work with. A lot of the time the sun causes people to squint, so bringing them to a shaded area allows for a better smile and shade works better for videographers and photographers.

After the boardwalk we went to South Gate Manor in Freehold for the ceremony and reception. Again, we arrived early to take some cinematic shots out in the front by the water fountain and then again in the ceremony area.

The ceremony was a shortened one with original vows. The food at South Gate Manor is amazing and Nikki and Bill were able to enjoy the majority of it since we did all the bridal party and family portraits before the ceremony.

The rest of the night was one big party on the dance floor. I went to highschool with Nikki and got to see a lot of familiar faces at the wedding.

Kristen and Pete approached us after they saw us filming other weddings at the Crystal Point Yacht Club and Clark’s Landing while attending as guests. They saw the wedding films we produced for those couples and wanted something similar. It was peace of mind for them...
Read More

Nulty FIlms traveled from the jersey shore to Scituate, Massachusetts to film the wedding of Jessica and Brandon. This was another special one for us. Brandon has been a friend since middle school so there was no doubt we were traveling for this one. Jessica and...
Read More

We filmed Meg and Ken’s wedding in the summer of 2021 at the Jersey shore. The couple had already had an intimate ceremony on the beach in Asbury Park, NJ the summer before and it wasn’t important for them to go through the motions this time around. Instead we went to...
Read More

Dana and Kevin called about 6 weeks before their wedding day. Helping them out in a pinch we were able to do video and photo. The couple only wanted a 2 minute highlight recap of the day as well as photos of the bridal party family and wedding day formalities. This...
Read More

Christie and Mike came as a referral from a cousin. Christie was a fan who followed for years and joked that I would one day film her wedding. Well, her wish came true. Christie and Mike got married in the summer of 2021 in Spring Lake, New Jersey at the Bath and...
Read More

Like a lot of my couples, I’ve known them for years prior to filming their wedding. Karlie and Adam were no different. They are also a victim of the covid shuffle. This was their third reschedule but we were able to pull off this wedding. It was the first time I ever...
Read More

Tori and Nick got married at the Crossed Keys Estates in Andover, NJ. They were technically married for a year to the exact date. This was a one year anniversary party for the couple and a wedding. It made the night a ton of fun. There were a lot of friends and family...
Read More

Lindsey and Dan didn’t let the rain stop them from having a fun-filled day in Asbury Park, New Jersey. We didn’t get to hit all the famous spots that we planned to during our portrait session with the bride and groom, but we did make it to a few of them. Some of those...
Read More

We filmed this wedding in the summer of 2021. Nikki and Bill was one of those weddings that was rescheduled 3 times. The day didn’t start with getting ready shots. That was important for Nikki and Bill. They wanted more shots of everybody already dressed in gowns and...
Read More

All weddings are special, but this one had a little extra meaning for me. We traveled down to Hendersonville, North Carolina to film my cousin Madi’s wedding. A fall wedding in North Carolina is beautiful. I would go back in a heartbeat. Madi reached out to me only a...
Read More